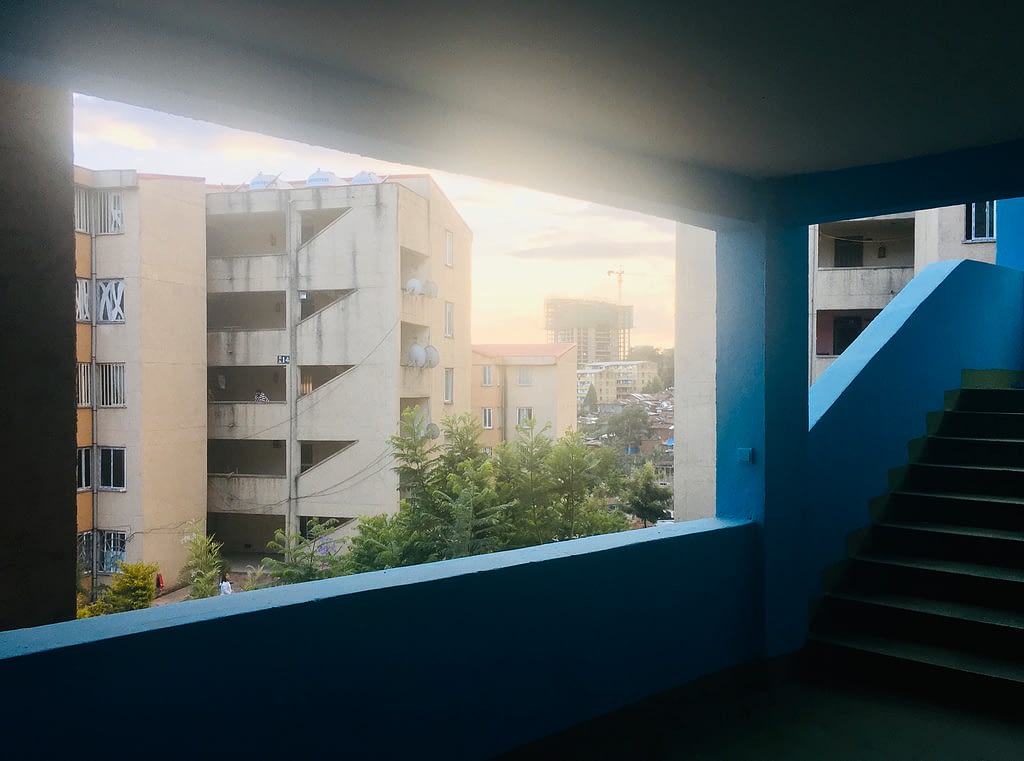 I am writing this text safely tucked in a studio apartment in Basha Wolde Condominium, Arat Kilo, Addis Ababa. Although the city is not in total lockdown, I barely leave my home, except for sporadic coffee breaks at a café downstairs. At least once a day, I make my way down from the fourth floor – pausing at the balcony of each story to look out at the city and check if it is still there and indeed intact between my climbs down each staircase. The pauses get longer with the passing days, and my gazes more unsure and less futile.

There seems to be so much time stretching between the sips one cup packs, to embody all the possibilities the coffee’s dreamy color alludes to. Yet, sitting on a low stool and staring down the road, the day suddenly dusks and I realize there’s no time at all.

There are new languid movements my limbs have adopted as they move through the day – in stark contrast to the lilting anxiety that sits at the opening of my throat. I think of my eyes and imagine how this lethargy translates into my vision. I see a wave, a certain dissolution and emergence of communities – as the physical spaces fade and the virtual appears.

Among the many articles, listicles, memes, and mantras I encountered online that urge us to reflect on the changing times brought about by the global pandemic, one stood out to me, captivating in its subtlety. Tamrat Gezahegne shares on his Facebook account pictures of his stone carving installation. These images are less of a call to action as they are a solace, inviting us to the tranquility the artwork offers. My mind wanders to the meditative act of carving a stone, remembering Louise Bourgeois as she says: “….the thing that had to be said was so difficult and so painful that you have to hack it out of yourself and so you hack it out of the material, a very, very hard material.” 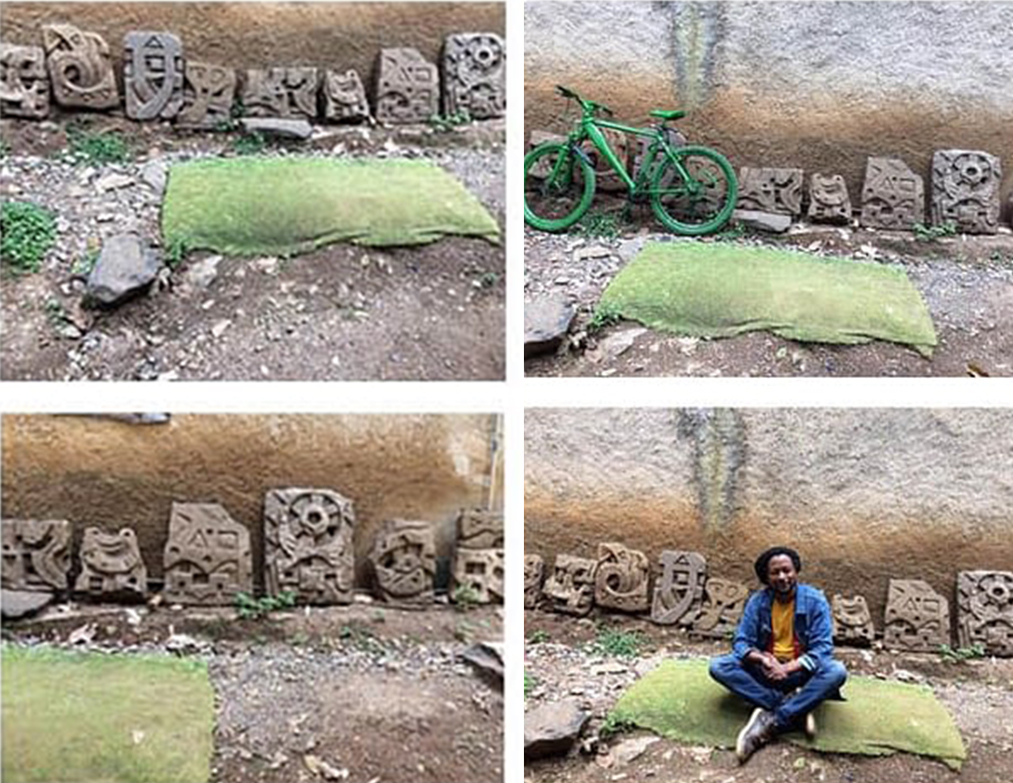 Thinking about the physicality of the rock, despite what it refuses to do, Gezahegne has carved it to fit his imagination. Empathy is my entry point to his work. Reflecting on his perseverance and the repetitive force he used to hack, I ask what the thing was that has to be said that was so painful, maybe in this case, so alien and unprecedented. When the Ministry of Health in Ethiopia announced the first case of Corona in the country, I saw huddles of people, mostly mothers living in my apartment complex talking in hushed tones. I imagined at one point every conversation in the world dominated by Corona. All of us connected with this invisible string of whispers scuttling through our ears. Art makes this link apparent and visceral, as if we all are components of one physical body connected through the veins under our skin. 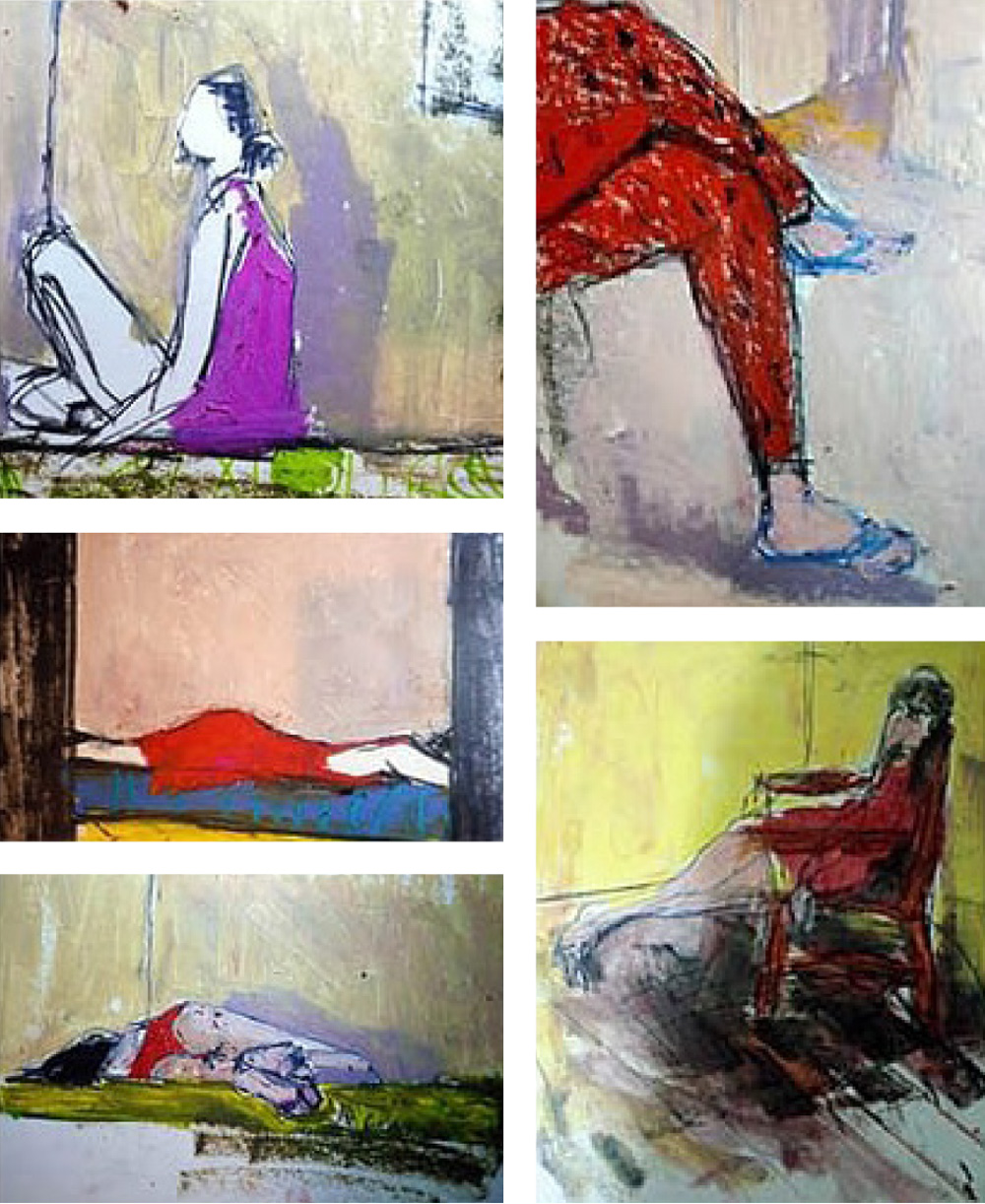 Scrolling down artist Selome Muleta’s feed is like peering through a hole into her private unraveling, performed beautifully and with care. We see the figure in her paintings shuffle in her bed from one side to the other, dressing and undressing through the day, cross-legged and ideally sitting facing the wall, before she melts into her surrounding, no different from the rigid and inanimate room she occupies.

I imagine us, Addis dwellers engaged in a collective struggle to swallow the concept of physical distancing and self-isolation and I wonder what small things are letting them linger at the back of our throat floating in a thick fluid of uncertainty. We are now constantly attentive to where our hands might fall, as if they had not once freely landed on the brackets of our neighbor’s folded arm, or cupped a stranger child’s cheek, or hoisted the trailing corner of netela and flung it across the back of a woman rushing out from the neighborhood suk. These acts of intimacies that threaded people into communities are now replaced with static jerks as we remember that it’s no longer okay to hug, kiss or shake hands. 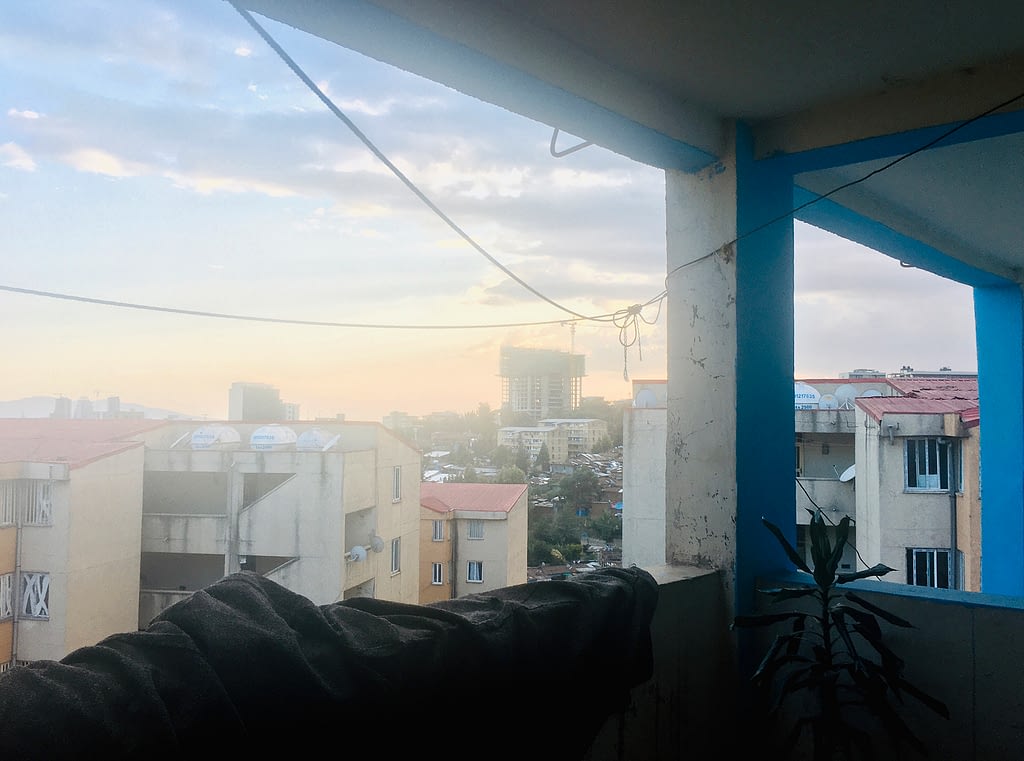 As the government tallies the positive cases from a meager pool of tests, the real fear of most Addis Abebes come from imagining the impending fate, when the virus surges into our community in full force as it has done into other metropolises across the globe. On April 8, the Ethiopian government issued a State of Emergency, the fourth one in three years, urging citizens to take the necessary precautions, abide by the sanctioned laws, support one another, and nurture a spiritual relationship with God.

Thus far Ethiopians’ strongest grounding against the unsettling nature of the virus has been a spiritual armor. On April 6, the Ethiopian Religious Council officiated the beginning of a one-month long prayer period among all religions represented in the country. The pandemic escalating in the middle of Lent, priests have been burning incense on the streets of Addis, to protect the city from COVID-19. The smoke in the air is reminiscent of the trash burning tradition on Hidar 12 (St. Michael’s day), of each year to commemorate the Spanish flu that took the lives of many Ethiopians in 1918. Alula Pankhurst draws our attention to this correlation in his post that includes his picture of a hazy Addis as the city celebrates the pandemic’s centennial by burning trash. He cautions those that criticize this traditional and historical practice and asks if we remember COVID-19 in 100 years, how will we commemorate it?

I noticed my mind wouldn’t trail to memory-scape pressed by the immediate curiosity of how all this is going to end. But I imagine the post-COVID world will be defined by the company we keep now amidst the storm. This pandemic challenges and disrupts our understanding of community. It confronts us with our loneliness, unveiling the true nature of our ties, not only as we exist confined alone or with a select few, but also by unveiling the true nature of our ties to people, places, and ideologies.

*Corona virus as it’s commonly pronounced by Ethiopians. It echoes sentiments of breaking/disrupting language as a form of resistance, reminiscent of Maaza Mengiste’s words in her war novel, The Shadow King, “the deliberate mispronunciation has spread across the country, started by those who did not know better and continued by those who do. It is another sign of [Ethiopians’] rebellion, another sign that they are trying to fight in every way that they can.” (Mengiste, Maaza. The Shadow King. W W Norton, 2019.)